As Mr Warren was in the area we jumped at the chance to have him come along to our meeting for one of his world famous critique sessions.
Shown below are pictures of the trees bought along by our members for advice / ridicule

Literati Spruce in the making.....Derek our awesome treasurer kindly donated some wire for this tree......he is recovering in Kings Mill Hospital and should be home by Friday.

Chinese Elm planting purchased from our winter auction, recently re-potted and re-arranged by Tony.
Peter has advised to remove the rear right tree (and pot up as a shohin) and develop the other 2 trees as a twin tree planting.

Small Deshojo, Mr Warren controversially shows a finger !
He does enjoy his work...... 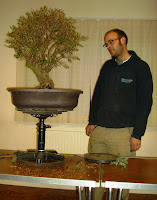 Geoff's 1/2 an Escallonia, it's no good trying to hide Mr Warren we can see you.

An oldish plum in bloom.....aah the sweet fragrance

Peter suggests a change of potting angle, removed a couple of offending branches, creation of some more deadwood and take plenty of cuttings for grafting branches at a later date..........we can still see you.....he's crap at hide & seek

Nice little collected Beech, not sure about the pot though !!

Mr Warren practices his limbo technique for the upcoming Olympics

A confused Hawthorn, which doesn't know if it's coming or going.....we've now decided it's going.....to the right that is

We highly recommend Peter Warren to any clubs out there for workshops or critique nights similar to ours. Lots of valuable information is passed on and a good laugh is had by all.....oh and he's cheap !! just kidding.
Posted by Ashfield Bonsai Society at 01:44